It is great fun, more so than I expected. When I first saw the wings online I thought they looked rubbish. But foiling can be a bit like that. It can look a bit rubbish but it feels amazing  and anything that gives you more time on the foil is a bonus.

Kited for about 4 years but not for 15 years

10 years of SUP and SUP surfing

Short board and long board surfer

Position in track : About an 2 cm from front

The first couple of runs where tricky. It takes a little while to get the hang of the wing.  First run out and the big shock was that I am a regular foot surfer and SUP foiler. All of a sudden my feet are the wrong way round. That made everything  feel really weird even though I am used to windsurfing in that stance. I did not feel comfortable controlling the foil with my left foot forward. First run out and back was about feeling the wing and learning how to get on the board, launch the wing,  and control it. All of that is pretty simple but at this stage I had gone about 50 – 100m downwind.

Run two I focused on controlling the wing and trying to point up wind. I did this both on my knees and standing up and was now holding my ground but not going upwind.

Run three on the way in I got on to foil and flying. Since I am reasonably commutable on a SUP foil everything felt fine and a massive grin appeared on my face. I also shot up wind. These Duotone wings really fly up wind. It was great fun really good to be able to spend so much time on the foil. Control was similar to SUP foiling in that getting lots of front front pressure is important and I was experimenting with the wing to try and find positions that to increase forward pressure. I found the wing was a bit of a combination of a windsurf sail and a kite. It is easy to use but there is a surprising range of positions and angles you can out them in.

I had some great crashes. I scared the hell out of myself in the gusts going so fast, especially when a gust combined with any swell. You go really fast. Heading out to sea on my non surfer stance I did not get on to foil. It just felt too uncontrollable and alien.  I tried toe side as seen on YouTube and that was no easier at this stage.

I tried waterstaring windsurf style rather than climbing on – that was harder than I thought and a fail.

Brilliant fun, note it is very demanding on your legs.

Position in track : I moved it back to about 4 cm from front

Heading in feeling pretty comfortable on the foil and now I was starting to go downwind on the swells and try some long gliding turns. Trying to drop the wing like the  guys do on the videos. That was harder than it looked and had limited success. Strong gusts when on foil remain scary !

Heading out on my weak side had a few short uncontrolled flights. I can now gybe off foil.

I lent my wing to a friend with similar experience level to me and he progressed at a similar rate to me.

Position in track : I moved it back to about 6 cm from front

I had some decent controlled flights on my weak side heading out, at last that is starting to come and feel more confident. I think one or two session and I will have that cracked.

Heading in I am rapidly improving starting to drop the wing down, pump on small swells. In the end I had to come in as my legs had given up on me. It really works your legs !

So all in all really good fun. I have no idea whether foil wings will be a flash in the pan or develop into something more. Some of the videos online are very impressive. For me it is a great way to get more time on the foil to improve my foil surfing without the need for a boat. It is also a great way to have fun on flat water days when there are no waves. Time will tell but I will certainly be giving it a few more goes.

I also think they make a great fun family toy for messing about on a regular sup.

Who is foil wings for

I think if you have never been on a foil before you are going to struggle at first. I think a couple of boat sessions first would be advised. But it certainly can be done with patience and the right location. Anyone with windsurf or kite foiling experience will progress rapidly. The unknown for me is how someone with no previous windsports background, but a competent foiler, would get on. I expect they would crack it pretty quick but it would be wise to go in with reasonable expectations and possibly try a few runs on big SUP with no foil to sort with. The wing flying skills are certainly easier to learn than windsurfing or kiting.

Launching and landing even in small waves, there is a lot of kit to handle.

Leashes everywhere. A wing and board leash means you can  get in tangle as a novice.

Find out more on Tips for your FIRST duoTone Wing Foiling session. 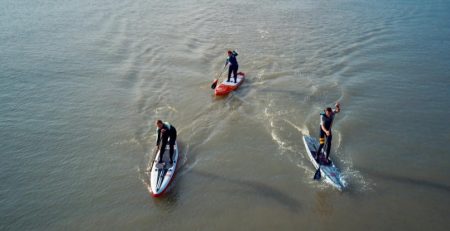 Learning something new and challenging make you feel great…Do it…

Over the last ten months I have been learning to foil on a range of craft. It has been... read more

Wing foiling – a few months in

I love it , fully hooked. For me it is a fill in activity for when conditions are not... read more 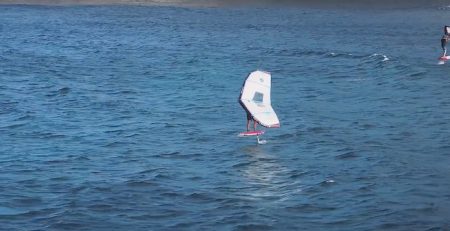 Tips for your first wing foil session Location Choose some where with plenty of space as there is a good chance... read more

That was a windy weekend for July ! Windsurfers making the make of it. ... See MoreSee Less

With another windy weekend on the horizon we have more inspiration for you with Lucas Meldrum brilliant series of "That Windsurf Podcast". He has some great guests from the UK and international windsurf scene to chat about what else windsurfing...lots of gossips, news and tips. Available on YouTube, Spotify and Google Podcasts. www.youtube.com/watch?v=pIsBb2G-TXQ ... See MoreSee Less